This feature allows NodeType.*.yaml files to be put into nested folders underneath <Package-Root>/NodeTypes:

This Fusion object stores its value based on the given discriminator and returns the same result in future calls during the same rendering. The value will then not be evaluated again.

With this PR we get news brand icons and covid-19 icons. Also some bugfixes related to unicode issues and much more. 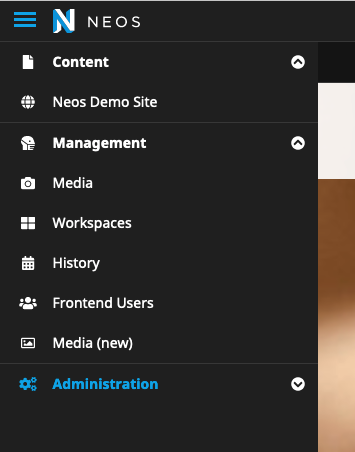 FEATURE: Show the last login date in the user/account list

BUGFIX: Make test actually test what is says it tests

The BackendControllerSecurityTest did not assert the login actually works in the test indexActionIsGrantedForAdministrator().

The icons are always white and when the asset source is active and on a small viewport we switch the background also to white. So the icons are not visible anymore.

This patch will adjust the color of the icon via filter functions. As we are not able to use the fill rule.

Show hotel icon instead of bed

BUGFIX: Fallback to jpg if webp is not supported on login screen

If the browser doesn’t support webp, it will fall back to the same filename with jpg.

Previously autocreated childnodes like ContentCollections were ignored when discarding selected nodes via the workspace module.

When deleting a node and discarding the change the auto created children would then stay deleted in the database and the backend would show no content/errors.

The behaviour is now the same as for publishing nodes and the direct child nodes are included in the discard if the node has auto-created child nodes or is a document.

Like in the new media-ui it could happen that the backend module throws an error because the Localization init is not completed yet.

So the initialized flag is now working way better.

What I did Split up the init function to be able to create the structure and data separately. And then build the structure before fetching the data.

How to verify it Install the new media-ui for instance and check the console for an error ;)

Some constraints of the 7.1 branch seem to have been accidentally upmerged to master. This change reset those to dev-master again.

This fixes the following error on master:

Since the variable with the annotation is populated in the constructor with a fresh instance the need of this annotation is at least questionable.

The first level node cache stores non existing nodes as null. This should have prevented repeated queries for the same non existing nodes. But isset returns false for a stored value of null in this case therefore saying that the node is unknown unstead of non existing, which triggers another db query. With this change, null is now returned and no additional query triggered by the context.

How I did it

The node cache returns the stored value of null instead of false.

BUGFIX: Only document Nodes should appear in Breadcrumb

When rendering the Breadcrumb menu in a Content node, the Content node itself is no longer added to the menu.

Use vanilla JS for toggling the technical information

#3341 build failures made me aware of this

The comparison in this is wrong. Because the depth is 0-based, but the nodes returned by getNodesOnPath(…) contain the root node, less-than-or-equal must be used.

When installing for development purposes, --prefer-install=auto needs to be used since Composer 2.1, see https://getcomposer.org/doc/06-config.md#preferred-install

What I did and how I did it

In the Neos page /en/features.html this reduces the number of queries from 138 to 133. In larger projects with more complex components this has a larger effect.

The condition in fluid evaluates the „referenceNodes“ and the result is not cached. Therefore when the variable is used for the output the whole code is evaluated again.

BUGFIX: Avoid use of removed isMethodSafe()

This has obviously been forgotten in the past… and since it’s not used by the new UI, that wasn’t noticed yet.

The NodeTypes folder was just added to have a hierarchical structure for the nodeTypes. Since nodetypes are often tightly coupled to the integration it makes sense to put the fusion prototypes that implement the rendering of for the prototype there aswell. Especially when presentation and integration are seperated.

This can already be done via include: ../../../NodeTypes/**/*.fusion in the Root.fusion. However changes to fusion files in the NodeTypes folder are not detected yet.

To support this pattern this change adds the folder NodeTypes to the folders that are monitored for fusion file changes.

The picture is taken by myself and can be used free of charge.

I used a webp this time for the wallpaper, as it is only 286k instead of 1.2M for the jpg variant.

This enables a PHP 8 build and adjusts some things to achieve PHP8-compatibility of the code-base.

Thanks a lot to @gerdemann !

Related to https://github.com/neos/flow-development-collection/pull/2455 - hence why this targets 7.1 instead of master

As the NodeAggregateIdentifier class is final and not mockable in unit tests.

The usage of window.Typo3Neos has been replaces with window.NeosCMS and with version 8 the old Typo3Neos will not work anymore. So we as core should use the latest version of course.

What I did Just replaced the old window.Typo3Neos with window.NeosCMS

How to verify it Just edit tags, create tags or images.

Every content collections renders nodedata for its removed content. This creates a lot of queries in the backend context of Neos as the query uses a modified context and therefore skips the first level nodecache. But the nodedata was only used by the old Neos UI and has no effect anymore on the new UI. Therefore removing this from rendering reduces rendering time a lot in the backend.

How I did it

This could be breaking if anyone implemented some modification of the removedContent part of the ContentCollectionRenderer object in their project which I can hardly imagine.

Load a page with 1 or more contentcollections in the Neos backend and compare query count.

In a large project this change reduced the number of SQL queries in the Neos backend or preview by ~21%.